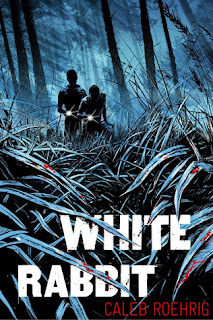 Rufus's half-sister, April, calls him late at night asking for help. When he and his ex-boyfriend, Sebastian, arrive at the party where April had been, they find a grisly murder scene. April swears she didn't murder Fox, although the knife in her hand and blood on her clothes tells a different story. April offers Rufus two thousand dollars to solve the mystery and clear her name. Thus the trio begin traveling through the night, searching for clues and talking to suspects, and Rufus finds that things aren't as simple as they seem.

This is a standard murder mystery/thriller story, with the addition of Rufus and Sebastian being LGBTQ+. The flashback scenes provide appropriate spacing and breathing room between intense scenes where the trio question suspects and try to suss out who is telling the truth. Most teens will probably not guess the ending before reading it. Unfortunately, most of the suspects use homophobic slurs in reference to Rufus and Sebastian, which could easily have been avoided even from the mouths of distasteful villains.

Read-Alikes: The Night She Disappeared, The Killing Woods, The Girl Who was Supposed to Die