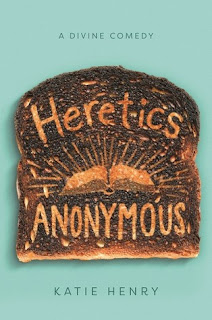 Michael, an atheist, has been sent to a private Catholic school. His dad keeps getting promoted within his company, which has sent Michael and his family traveling across the country, and Michael has been promised that this is the last move. Michael ends up making friends with other "heretics" at his school: people who, for various reasons, do not fit the mold of a Catholic school student. They meet together as a sort of unofficial support group, until Michael challenges them to begin changing the system. Thus the group of heretics start fighting back against what they see as injustice at their school.

While Michael himself and his friend Lucy are both well-developed characters, we learn much less about the other members of HA, which is unfortunate. Watching them plan and fight back against their school with mixed results reminds me of Jennifer Mathieu's Moxie. The story is about the group of characters, but mostly it's about Michael and his relationship with his friends and also with his family. Michael's frustrations at being moved across country on the whims of his parents will ring true to teens who have had to move in the middle of a school year. I was impressed by the inclusion of an atheist character, as this is a rare occurrence in teen contemporary literature.

I received a complimentary copy of this book through Edelweiss for the purposes of review.
Posted by Jenni Frencham at 12:00 AM