My library frequently has passive programming for the children, usually in the form of a craft that they can do while they are at the library.  The limit to this type of program, though, is that it has to be something kids can do independently with the materials we feel comfortable leaving out, so we try to avoid anything requiring pointy scissors, liquid glue, glitter, paint, etc. 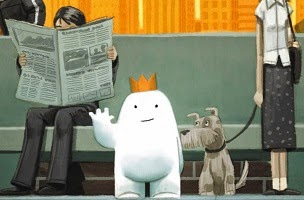 This time I wanted to give the kids something fun and different to do in the library that didn't involve making a paper sheep or a dancing leprechaun. I choose The Adventures of Beekle: An Unimaginary Friend as my subject, both because it recently was awarded the Caldecott Medal and also because Beekle is just too cute not to appear in a library program. 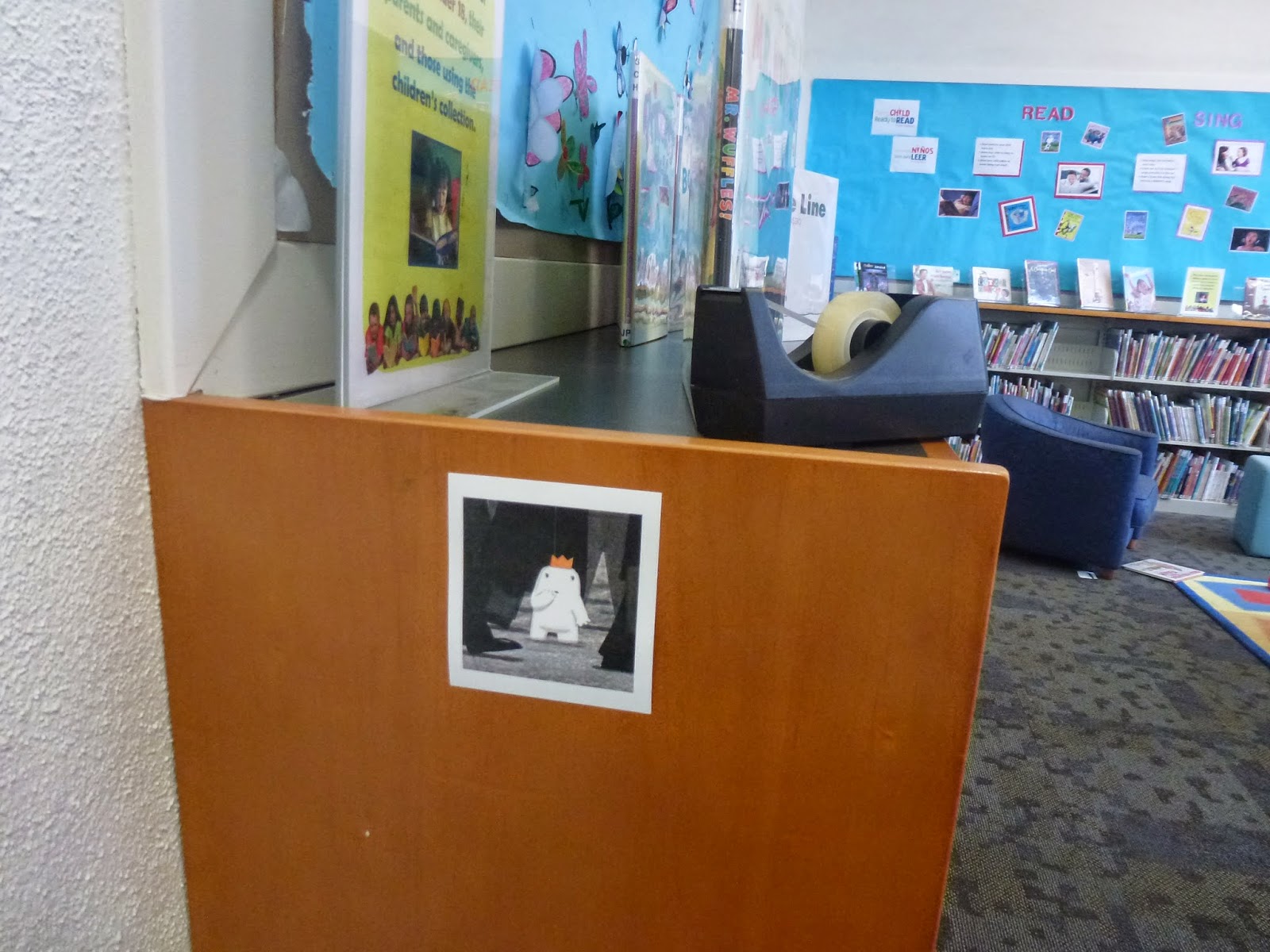 I took ten Beekle pictures and printed them large enough to be easily visible from fairly far away - about six pictures to a standard sheet of paper.  I posted these pictures around the children's area of the library, always in places where kids could see them, but usually in places where they would not end up being moved, either accidentally or intentionally. I made a check sheet with smaller versions of the same pictures so kids could keep track of which ones they'd found.  Then I used a large board near the children's reference desk to explain the scavenger hunt. Kids could take a sheet and a golf pencil and hunt around the children's section of the library to try and find Beekle.  There was no prize for finishing; rather it was a fun activity to do while in the library that hopefully would encourage the children to look in different parts of the children's department and might even get their parents involved.


This week I have observed multiple children using the Beekle scavenger hunt, and I have also seen them drag their parent/guardian into the hunt as well, usually with cries of, "But I just need to find two more!" When they turn in their papers, I congratulate them on a job well done and offer them a high-five. I will definitely use this program again as it gets people walking around the library and talking about books and enjoying their time here. Smiling, happy patrons are patrons who will return. 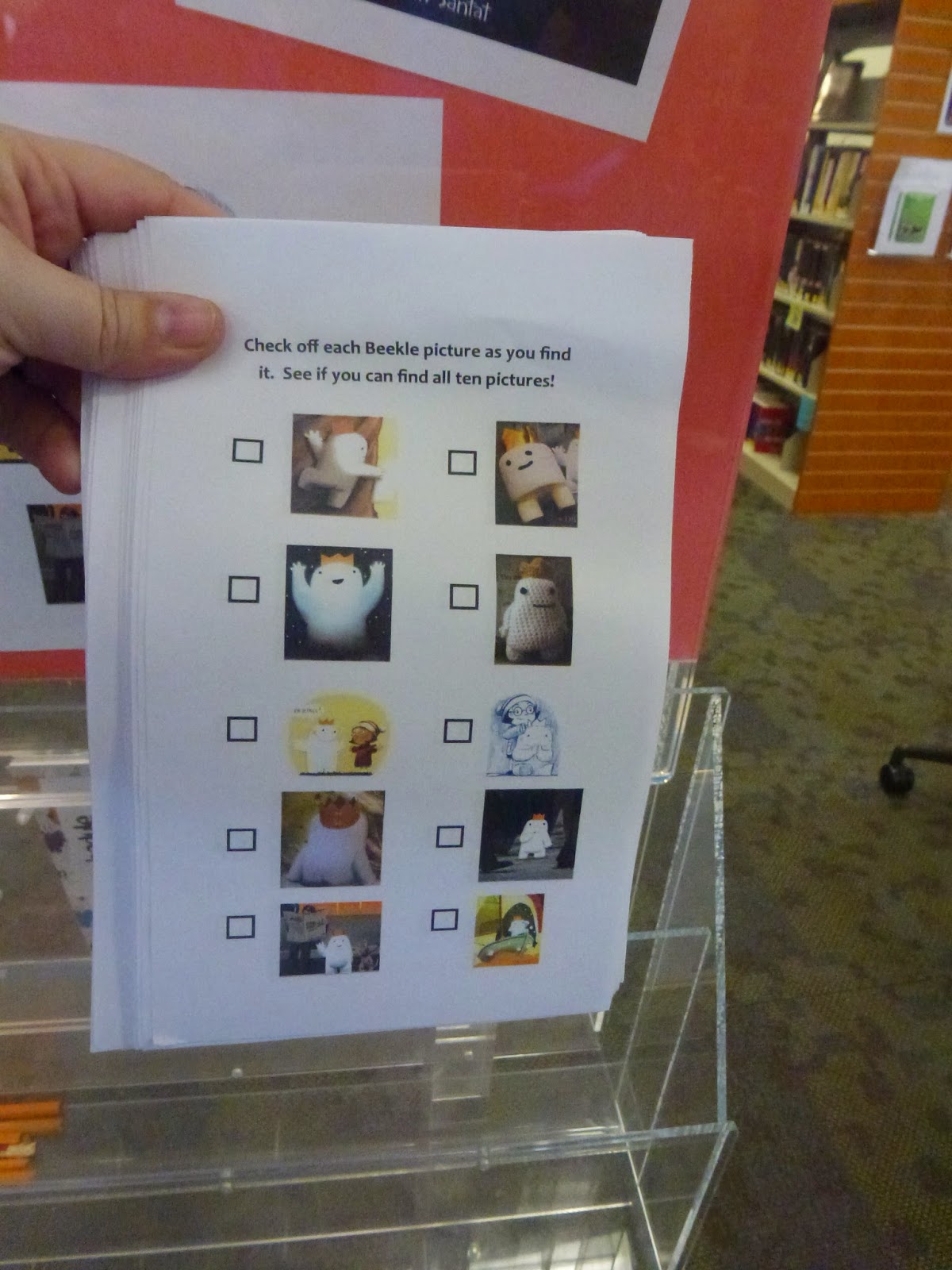 Have you ever done a scavenger hunt in your library?
Posted by Jenni Frencham at 12:00 AM

Love this idea. I would love to adapt something similar for older students. Any ideas for 5th graders?

If I were making this type of hunt for older kids, I would either post trivia questions for them to answer (so they'd have to find the question and write down their answer, or I'd make the check-off sheet full of riddles, and each picture/object they found would be an answer to a riddle. I've noticed that some older students still enjoy hunting for the pictures themselves, but it would be more fun for them if it were a bit more challenging.

I did this in March for the little ones and they loved it! Being March, we had a leprechaun named Shaughnessy. I moved him weekly to keep them interested. Here are the questions they had to answer to find him.

This is Shaughnessy. Shaughnessy has been a naughty little leprechaun and run away. Will you help us find him?


1. In picture books, go to the “B” section. Is Shaughnessy there? If not, write down a book about a turtle.

2. Let's look in Neighborhoods! Go to the “Popular” section (it's the purple one.) Is Shaughnessy there? If that silly leprechaun isn't hiding here, tell me who your favorite popular character is.

3. Maybe he's just learning to read, let's look in the Easy Readers. Go to the “P” section. Did you find Shaughnessy? If he's STILL hiding, write down a book about an animal.

4. Hmmmm . . . . . speaking of animals, maybe Shaughnessy is thinking about getting a pet! Let's go check the pet books in the non-fiction section. You'll find them around the number 636. If he's not playing with the puppies, tell me what your favorite pet is.


WELL!
That Shaughnessy is a tricky little leprechaun!
Did you find him?
If you did, tell us where and win a prize!

Some did it alone and some did it with an adult. The "prize" was a dumdum sucker.