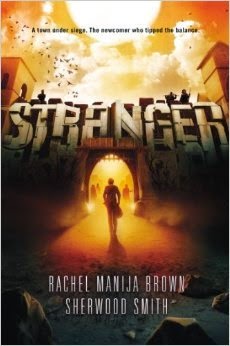 The world has undergone a major change, governments have fallen, and now people are picking up the pieces and attempting to survive and thrive in a different and dangerous world. The western U.S. has turned into an Old West type of atmosphere, with each town having its own unique government and dangerous critters roaming the wild. A new boy comes to the town of Las Anclas (formerly Los Angeles); he's carrying a secret, and a powerful king from the east wants it. Is this boy worth saving, or should he be turned over to pacify the king?

This book fits into the second category of dystopian fiction. Unlike the standard Divergent or Hunger Games-style books, where the world has been taken over by a corrupt government, this book tells of a cataclysm that sort of reset the world and stole its technology. People, plants, and animals have many different kinds of mutations, and each town has its own rules. This story is told from five different viewpoints, each of which adds an interesting perspective on the larger story.

What I Liked: Lots of diverse characters. Lots of Latino culture with smatterings of Asian and Native American cultures thrown in. Gay and lesbian people mentioned without it being a big deal at all. One of the main characters thinks she might be asexual, which her dad tells her is completely normal, until later on when she is in a relationship with both a boy and another girl. The multiple perspectives on the story sounded different and were emphasized with different fonts as well, making it easier to transition between characters.

What I Didn't Like: This book wasn't that much different from Killer of Enemies or Inhuman. It would be a good read-alike, but I found myself rapidly skimming the last pages in the book, because I didn't really care what happened. The reading wasn't as compelling as I expected, although it is indeed a good story. Due to both the popularity of dystopian stories as well as the need for diversity in literature, I would add this book to my library's collection if it weren't already there.

Read-Alikes: Inhuman, Killer of Enemies
Posted by Jenni Frencham at 12:00 AM