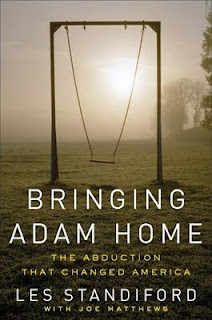 The 1981 kidnapping and murder of Adam Walsh changed the face of America.  Parents no longer let their children run out the door with the warning, "Be home by dark." Schools added curriculum about stranger danger and warned children not to accept promises of toys or candy from strangers. I remember being warned of this as early as kindergarten, one time declining a ride home from a classmate's parent, since I knew my classmate but had never met her mother.

The Walshes went on to create America's Most Wanted, a television series responsible for the capture of numerous criminals, and they have fought hard for laws protecting children and harsher punishments for kidnappers. Unfortunately, the police were not able to solve the most personal of the cases, Adam Walsh's kidnap and murder, until very recently.   This book details the Walsh case as well as the developments in legislation since 1981.  This was an interesting book, although not a happy one.
Posted by Jenni Frencham at 12:00 AM