A Long Walk to Water 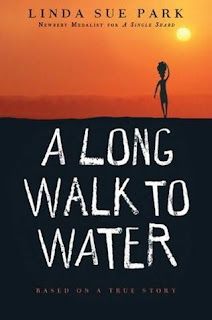 This book follows the stories of two young people in Sudan. Nya lives in Southern Sudan in 2008, and every day she makes two trips to the pond to get water and bring it home.  She takes two trips a day, every day, from the time she was old enough to go on her own until she will be old enough to marry.

In 1985 Salva escaped a brutal skirmish in his village and traveled with a group to a refugee camp.  He lost his family and everything he had.  He spent twelve years in various refugee camps until he was sponsored by a family in the United States.  Salva determines that he will help those who have been left behind in his war-torn home country.

I don't want to give any more details and end up spoiling what is an excellent story.  This book would be great for a middle school teacher to read to his/her class or for a middle schooler to read on his/her own time, but even if you aren't in middle school anymore (and aren't you glad that you're done with that phase?), this book is definitely worth your time.  At 115 pages, it's a very quick read.  Stop by your local library and pick up a copy.
Posted by Jenni Frencham at 12:00 AM