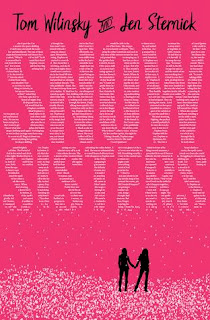 Soph is a rich New Yorker. Tess is from a farm in New Hampshire. The teens room together at a writing conference and together learn more about each others' worlds.

Soph and Tess are rooming next to two other girls - Orly and Chris. Chris wants to be an investigative journalist, and when she discovers that Orly is transgender, she decides to investigate; i.e., she digs through Orly's things and spreads rumors to the other girls, trying to turn them against Orly. Never once does she speak with one of the event coordinators or instructors about her problem. This culminates in Chris moving the carrot nose from a snow person to turn it into a carrot penis. There isn't much resolution of this issue; there is an attempt at some sort of restorative justice with Chris and Orly, but as it appears in the last few pages of the book, it mostly falls flat.

The story of Soph and Tess - without the subplot of Orly and Chris - is fine. Soph and Tess come from very different worlds and get to learn about each other through the conference. This plot alone would have made this book fine. However, I take real issue with the transphobia throughout the book. Chris consistently misgenders Orly and is only halfheartedly corrected by some of the other girls. Chris's "come to Jesus" moment at the end does not end with her actually apologizing to Orly; she simply is bothered that no one "warned" her that she was going to have a transgender roommate. The reader is supposed to begin to feel sorry for Chris and this terrible position she was put in, when in fact Chris is the one in a position of power throughout the entire story. I can't in good conscience recommend this book to transgender teen readers. They deserve better.

Recommended for: teens
Red Flags: transphobia, homophobia (a side character was punched in the face by his father when he came out), misgendering, etc.
Overall Rating: 1/5 stars

Read Instead: If I Was Your Girl, If You Could Be Mine, Beauty Queens
Posted by Jenni Frencham at 12:00 AM