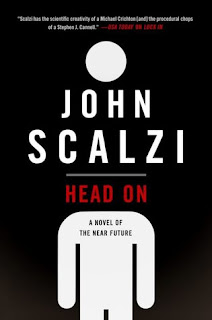 Head On continues where Lock In left off, with Chris, a rookie FBI agent, and Chris's partner, Leslie, solving cases. This case involves a new sport called Hilketa that is primarily played by Haden's survivors. An athlete dies in the middle of a game - a first for the league and the sport, and Chris and Leslie are rushing to uncover the truth as witnesses die and evidence is tampered with.

This is a standard detective novel with the added twist that Chris and other Haden's survivors navigate the physical world using Threeps, robot bodies that they can control with their minds so they can speak, drive, work, and be with the rest of the world while their bodies are "locked in" in their beds. These Threeps are also what they use to play Hilketa, a game where one player is chosen at random and the other players attempt to remove that player's head and score points with it. I had a bit of a shock when I started reading this book and learned about Hilketa, but had forgotten about the use of Threeps and thought that players were actually ripping each other's heads off. Hilketa is a brutal and violent game, but the damage is only to the Threeps.

I initially read Lock In because it won an Alex Award, which is given for adult books with teen appeal. Since then I have read Scalzi's other novels, including the Old Man's War series, which I particularly enjoyed. Lock In and Head On are detective stories, and they would make great read-alikes for fans of gritty detective novels and crime procedural shows like Criminal Minds, Law & Order, Bones, etc. Another interesting point is that never once during either of the books is Chris's gender revealed. Scalzi wrote on the Tor blog about this choice, and I think it's really interesting. During the first book I assumed Chris as male, probably because Chris is often referred to by their last name, Shane, which is typically a male name.

I received a complimentary copy of this book through Netgalley for the purpose of review.