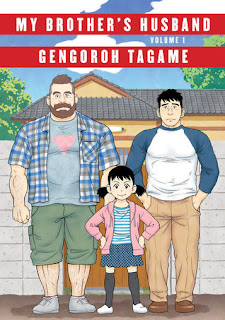 Yaichi's twin brother moved to Canada, married Mike, and then died. Mike travels to Japan to walk in Ryoji's footsteps and meets Yaichi and his daughter, Kana. He visits with them for several days, learning more about Ryoji's family. Meanwhile Yaichi explores what he thinks about same-sex relationships and marriage.

This was a quick read; Kana reminds me a lot of Yotsuba from the eponymous manga series. A lot of the concerns that Yaichi and his neighbors have regarding Mike and Ryoji will sound reheated to queer Americans who have heard it all before, but it was interesting to see someone in another culture wrestle with these questions. Overall, this was a good, quick read and I would recommend it to fans of manga.