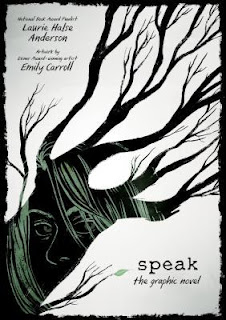 Melinda begins her freshman year a very different person from the one who just finished eighth grade; over the summer she was raped at a party and called the cops. Her classmates don't know about the rape, but they do know about the cops breaking up the party. Melinda is an outcast at the school. She finds herself unmoored without her former friends and is further traumatized by her rapist, who also attends her school. Throughout the school year, Melinda slowly finds her voice and begins to heal.

The novel version of Speak is one of those rare timeless teen books which belongs on every library's shelf. This book is an amazing adaptation of that story. Parts of the book have been updated (references to Instagram, etc.), while the original message of the story is still present. The black and white drawings are appropriate for the serious topic, and the novel manages to portray the ridiculousness of some aspects of high school (such as the constant changing of the school's mascot and the lack of supplies for the art class) while also demonstrating the very real impact the social aspects of school have on a teenager's ability to thrive and learn. Melinda is shown as a very real, developed character who has hidden inside herself; throughout the story we get to watch her unfold and learn to speak again.

I have recommended before that everyone read Speak; I say the same of this graphic novel adaptation.