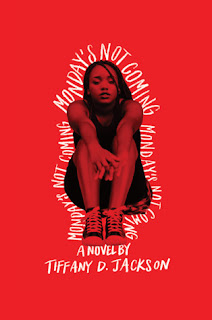 Claudia and Monday are best friends and practically inseparable, but one summer when Claudia is away at her grandmother's, Monday doesn't write to her, and Claudia can't find Monday once she returns home, either. No one else seems bothered by Monday's disappearance, but Claudia is determined to find out what happened to her.

This book alternates between "before," chapters before The Big Event, and "after," which are after TBE, and things that are labeled "One year before the before" or "two years before the before," etc. etc. It's extremely confusing to read because some of the chapters are short and the time jumps around so much. The bottom line is that Monday was from an abusive home and her mom beat her and locked her in a closet until she died, then stuffed her body in a freezer, and Claudia was the only one who noticed she was gone because Monday didn't live in a nice part of town and no one was willing to say anything. Claudia has a breakdown after Monday's body is discovered, and she loses about two years of her life as she tries to recover, during which time she often forgets that Monday is gone.

What I Liked: The premise is good and necessary, even if it doesn't make for a nice, happy story.

What I Didn't Like: The time jumps in the chapters were difficult to keep track of since there were so many timelines going on at once. This book is also WAY too long to tell the story it was telling. The 400+ page tale could have been reduced to maybe half that. Claudia doesn't read as 14 (the age she believes she is) or 16 (the age she actually is). This may be due to her trauma, but she still sounds so much younger than she actually is.

Bottom Line: I will probably buy it for the library, but it won't go on my personal shelf.