Little Do We Know 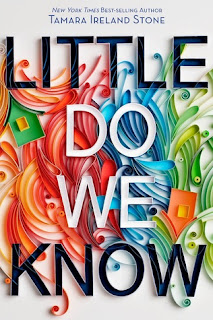 Hannah and Ellory have been best friends and neighbors their entire lives. Now they haven’t spoken for over three months. Hannah’s dad used her college fund to boost the Christian school he founded, and Hannah finds herself falling for the music pastor. Meanwhile, Ellory is cherishing the days until she and her boyfriend head off to separate colleges and is attempting to help her mother plan her wedding. Neither Hannah nor Ellory wants to discuss what happened three months ago.

It’s impossible to talk about my opinions regarding this book without spoiling the ending; consider yourself warned.

The relationship between Hannah and Ellory rang true for me; also, both of their characters were really well developed. Hannah’s school and church are spot-on for an Evangelical Christian church/school. Ellory’s discomfort at spending time at Hannah’s church also makes sense. I appreciated the discussion of Hannah’s doubts regarding what she believes and whether she believes because it’s true or if she believes because she’s been taught these things her whole life. The church is described accurately without being mocked.

The scene near the end where Ellory and Hannah talk about what happened - Ellory’s stepdad-to-be molested her one day when her mom wasn’t home, and when she told Hannah, Hannah tried to get her parents involved, but a flippant comment from her dad made Ellory feel that she was to blame for what happened. The reveal and consequent dramatic conclusion / Disney-esque ending was a bit much, but probably not over the top for the intended audience. Recommended.

Read-alikes: Devoted; Evolution, Me, & Other Freaks of Nature; Speak