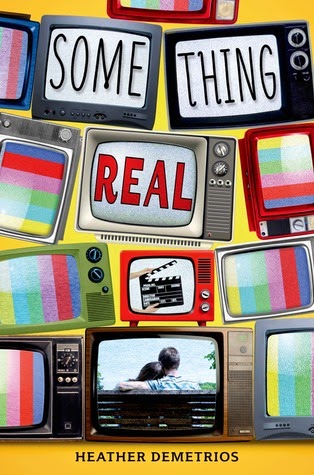 Bonnie Baker is part of the Baker's Dozen - thirteen kids and their parents who had a reality TV show.  After an all-too-brief hiatus from the show, Bonnie discovers that the show is going back on the air, which means her life will be visible for the public eye once again.

I actually stayed up last night to finish this book. I had one of those "finish the book, look at the clock and gasp at the late hour" moments. This book would be a great read-alike for Reality Boy, as it gives another fictional glimpse into the life of a reality TV family. It's funny; until I read these books I didn't think much about what it would be like to be a star in a reality TV show and have cameras all over your house, etc. Now I wonder what'll happen to the kids on Kate + 8 or The Duggars or whatever when they grow up.

Anyway, we don't have this book in my library because I have no budget, but if I did have one, I'd get it because I think this book would appeal to many of my students and it's relatively free of red flags.

Recommended for: teens, fans of reality TV
Red Flags: language; Chloe and her boyfriend do everything BUT have sex, none of which is described but is definitely hinted at
Overall Rating: 4.5/5 stars
Posted by Jenni Frencham at 12:00 AM