Of Beast and Beauty 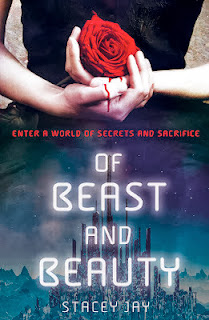 Princess Isra lives in one of the domed cities on her planet. She is the latest in a long line of female rulers who will one day give her life for her people, because the roses that protect the domed city need human blood to survive. Gem, one of the Monstrous who lives outside the city, is captured within the city and piques the interest of the princess. They soon realize that neither is truly a monster, and together they plan to save their planet from destruction.

This was an interesting twist on the Beauty and the Beast story. I enjoyed the science fiction elements, along with the Shirley Jackson-esque "lottery" situation where a female in the ruling family (married in or born to it; doesn't matter which) voluntarily sacrifices herself for the good of the city. It was fun to watch Isra's eyes open as she learned more about what was really happening in her city. This book has been very popular with the girls in my library who like fairy tale rewrites like Beastly.

Recommended for: teens
Red Flags: some violence; people are said to swear (but no words are listed)
Overall Rating: 4/5 stars
Posted by Jenni Frencham at 12:00 AM