The Boy from the Basement 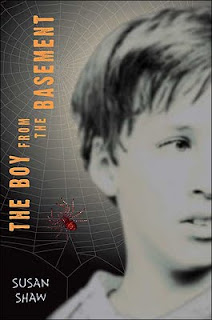 Charlie lives in the basement of his home.  He is being punished, so he is not allowed out of the basement.  Every night after his parents fall asleep, Charlie sneaks out of the basement and takes one drink of water from the faucet.  If there happens to be enough bread in the bread drawer, he'll eat one piece of bread with peanut butter on it.  Then he opens the back door and uses the back yard as his toilet, only to sneak back inside and head back down to his basement.  Until one day the back door slams shut behind Charlie and he is trapped outside.

Charlie is picked up by an ambulance and taken to the hospital, where the doctors are concerned about his frail, dirty body and his inability to answer simple questions like "What's your last name?" or "What's your phone number?"  This concern is heightened when his parents don't report him missing or attempt to visit him in the hospital for weeks. Why has Charlie been locked in the basement for so long, and what will happen to him when he's released from the hospital?

This was a good book, and I am glad that I read it.  It's definitely a sad story, but I know there are other Charlies out there.  Here's hoping they all find a way to escape.
Posted by Jenni Frencham at 12:00 AM