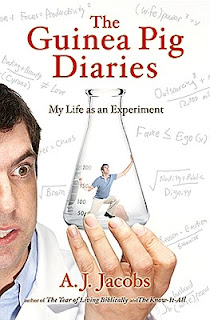 Jacobs, A.J. The Guinea Pig Diaries: My Life as an Experiment. New York: Simon and Schuster, 2009.

I encountered Jacobs's work at a bookstore several years ago.  He had embarked on a year-long experiment where he attempted to follow every single law and rule written in the Bible. The cover of his book caught my eye, and I flipped through it, but decided not to read it.  My guess is that his treatment of God's Word was less than reverent, and I won't stop anyone else from reading about his experiences, but I didn't think that book was for me.

This book, however, details several mini-experiments where Jacobs attempted to do certain things for thirty days.  He spent one month outsourcing his life.  He spent one month living by the rules of radical honesty. He attempts to follow George Washington's rules for life.  Each chapter, each experiment, is different from the one before and all are wacky and odd.

I enjoyed reading this book. Jacobs has an entertaining writing style and his experiments were mostly harmless. I do like the fact that he is willing to subject himself to all of these experiments in order to write about them, rather than asking someone else to be the guinea pig.
Posted by Jenni Frencham at 12:00 AM