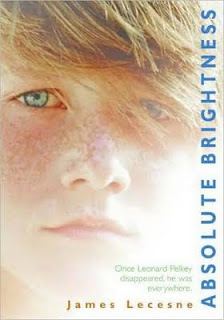 When Phoebe learns that her cousin Leonard is going to move in with her family, she is less than thrilled. When Leonard arrives and Phoebe discovers that Leonard is what some psychologists have called "pre-gay" (exhibiting all the signs of being gay without admitting to it), she is horrified.  Leonard soon makes friends with Phoebe's mother's clients at her hair salon, transforming the way they look so that they feel beautiful.  At school, however, Leonard is picked on.  He is an outcast everywhere, except in drama club, where he is picked for the role of the fairy in the upcoming Shakespeare play.

Then one day Leonard disappears.  The police search for weeks, and when they do discover a lead, it creates more complications than Phoebe and her family can handle. Soon Phoebe is dealing with conflicting desires of revenge and mercy, and she finds that she misses Leonard more than she thought possible.

Once I started reading this book, I wasn't sure that I was going to like it.  A book that is so obviously pro-gay isn't something I generally pick up.  But I will admit that I liked the fact that Leonard decided to be himself, whatever "himself" really was, no matter what his classmates thought of him.  And I was really pleased with Phoebe's choices toward the end of the story as she battles a decision far beyond her years.  I thought it took guts on the author's part to argue both for the rights of gay teens and against the death penalty. This was an intriguing book, and it forced me to think about things from a different perspective.
Posted by Jenni Frencham at 12:00 AM