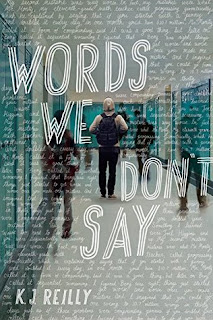 Joel doesn't talk anymore. He drafts text messages that he never sends, but just spends his time keeping his head down and not getting involved with anything. During his mandatory soup kitchen volunteer time, he gets to know some of his classmates as well as some of the guests at the soup kitchen and then learns about how the world is bigger than his problems.

I think there is a reader somewhere for this book, but I am not that person. The book starts off in the middle of a shift at the soup kitchen, and it takes a very long time to figure out what's going on. Joel may not talk much to other people, but he rambles a lot in his head, and the majority of this book focuses on his internal monologue. As such, it takes a long time to get to know the other characters. It's also not a compelling, page-turning read. I would give this book to strong readers who enjoy books that are more character study than plot.