Alan Cole is Not a Coward 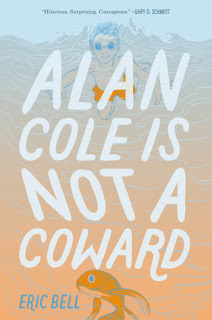 Alan's older brother Nathan torments him constantly, so when Nathan comes up with another CvC (Cole versus Cole), Alan has to agree to go along. Each brother has a list of seven tasks and one week in which to complete them. If Alan doesn't agree to do this, Nathan will tell the whole school that Alan has a crush ... on a boy.

To be honest I really, really didn't like this book at the beginning. The brother is just SO cruel, and forcing a middle schooler to compete in this brother vs brother thing or face being outed is just over the top. To make matters worse, Alan and Nathan's father is extremely unkind to his children. He calls Alan "goldfish" because he's forgettable and unimportant and Nathan "pig" because he's messy. He rules over their house with an iron fist, and regardless of what we find out at the end, this makes for a rough beginning of the story.

The middle of the book shows Alan trying to finish his tasks, eventually learning a few things and developing a backbone, and finally we get the *big reveal* where we find out everything that caused this family to be such a mess (which I won't discuss here because spoilers). So there's a reason the father is a cruel heartless dictator and a reason Nathan is following in his footsteps. It does have a happy-adjacent ending, but wow the beginning of this book is rough. I think this is one I would recommend as a "read together" book instead of an independent reading book.

Read-Alikes: Okay for Now by Gary Schmidt; Better Nate than Ever by Tim Federle
Posted by Jenni Frencham at 12:00 AM