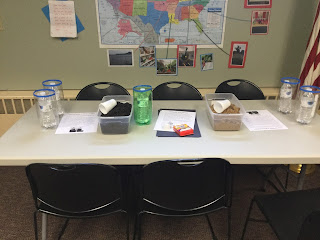 My science storytimes have been much more successful than the separate science club program I attempted to do. Here's what we did for worm storytime.

Opening Rhyme: Open them, shut them

Activity
Instead of a craft, we made worm habitats. Googling "DIY worm habitat" will yield plenty of ideas, but I gave each family an empty 2-liter bottle which had had its top cut off, a 20 oz water bottle to sit in its center, and a bunch of sand and soil to spread in layers in their bottles. Once the sand and soil are in the layers, the kids were able to choose their worms.

Next, while the worms were settling in, we made "curtains" for the outside of the habitat. Worms don't like sunlight, so they need a barrier around the bottle. I cut black construction paper so it would fit around the bottle and let the kids decorate it with chalk, then we taped it into a "sleeve" that would slide on and off the bottle with ease.

I sent home directions for caring for the worms along with suggestions for ways to "free" the worms when the families were done with them. This program was a huge mess and took much longer to clean up than a standard storytime, but it was definitely worth it. I do science-related storytimes once a quarter, and this one definitely got the best response so far. I have had parents and kids coming up to me and giving me updates on their worms throughout the week. 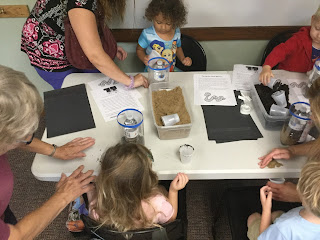