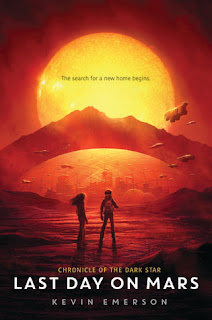 Liam and Phoebe are Martian children; that is, they are humans who have been raised in the Mars colony. Earth is no more, and the sun will soon go supernova, so the Martian colony is being emptied of its inhabitants as they head for a distant star and the hopes of another planet. The children of scientists, Liam and Phoebe are among the last to leave the planet. But then they discover a deeper plot behind the destruction of their home world.

I enjoyed the idea of a Martian colony, of the kids sneaking around and getting in trouble like kids do, and of the various catastrophes that befell the duo as they attempted to save their parents and get to the colony ship before it left orbit. The big, hidden, twist in the plot that made things complicated at the end, however, seemed a bit much for a kids' book. In an adult novel, there would have been more room to address this twist; in this kids' book, it seemed like a bit of a stretch.

Read-Alikes: The Silver Six
Posted by Jenni Frencham at 12:00 AM