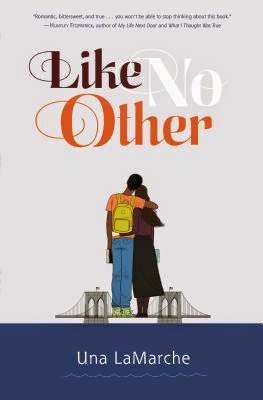 Devorah is a good girl, obeying all the rules her Hasidic community has placed before her, no matter how strict those rules may seem. Jaxon is a stereotypical nerd whose parents are insisting he work hard and get into college, providing him with opportunities they never had. The two meet in a broken-down elevator during a hurricane. Devorah is not supposed to be alone with a boy, not supposed to talk to one, and she's definitely not supposed to fall in love. But Devorah is finding herself questioning her upbringing, while Jaxon tries to find ways to show Devorah he cares for her while still honoring the rules she chooses to live by.

I liked the inclusion of both a West Indian character and a Hasidic character in this book, and the insights into the Hasidic community were definitely interesting and different. I was actually surprised at the ending, though; and those who like their romantic stories to end with a "happily ever after" may be surprised at what "happily" means in this particular story. All in all, this is a good diverse book that should be included in any YA collection.

Recommended for: teens
Red Flags: language - fairly minor b/c of Devorah's upbringing, but she still manages to think swear words, even if she doesn't speak them; some violence b/t members of Devorah's community and Jaxon; some consensual groping but no sex and nothing graphic
Overall Rating: 4/5 stars

Read-Alikes: Hush, The World Outside, Keep Sweet
Posted by Jenni Frencham at 12:00 AM