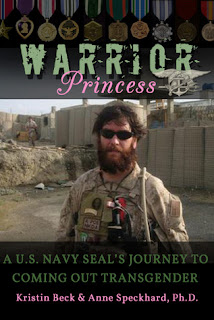 Kristin Beck is a transgender woman who was able to come out - to herself, to her family, and ultimately to the world - after retiring from service as a Navy SEAL. This book chronicle's Kristen's journey to become herself.

I really, really wanted this book to be good. There aren't enough good trans books in the world. However, this book is not worth the electronic space it takes up on my Kindle.

1. It is narrated in third person, presumably because someone else wrote the book and just tacked on Kristen's name to make it more appealing. It is really hard to read about a person's struggles and difficulties but not be in their head space. That kind of distance made me not care as much about the story.

2. There are many, many grammar and other writing errors. Not only is "transgender" used as a noun (it's not), but Kristen is said to have given "1000%" on several occasions. Also, this author needs to learn how to use the word "literally." Overall, the book is trying too hard, similar to the first few essays I received from my eleventh grade honors English students when I taught high school.

3. This book spends way too much time 1) introducing itself (5% of the space), 2) telling about the history of Kristen's family (another 15%), and 3) focusing on her time in the SEALs (probably 30-40% of the space). Very little of the book has anything to do with Kristen's struggle, which is what I really wanted to read about.

The moral of the story is this: don't read this book, but if you must, then check it out from the library. At least then it won't be a waste of money.

Recommended for: People who've read everything else about the trans community.