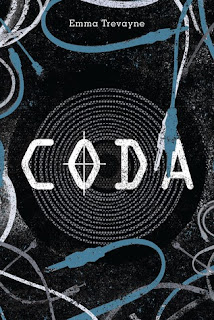 Anthem and his family live in the Corp, a society where music carries addictive powers and the government tightly controls everything, even the songs people are allowed to hear.  Anthem is trying to keep his family together, caring for his ailing father, preventing his siblings from becoming music addicts, and creating music on his own with a group working very much outside of the law. But when the government begins to tighten its grip, what will Anthem sacrifice to save himself and his family?

I didn't think I'd like this book.  The author does very little world-building, so it takes a while to understand what's going on.  The ending of the story is intense, although unsurprising. I can imagine this book being very popular with teens, especially those who have read The Hunger Games and all the other dystopian novels. Also, I really appreciated the fact that the main character is bisexual, but it's not a big deal.  The book isn't about him being bisexual; it's about other things and the reader figures out that he's bisexual.

Red Flags: the whole book is about drug addiction; some violence