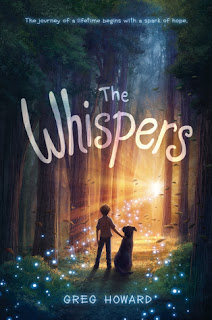 Riley believes in the old tales of the Whispers, forest creatures who can grant wishes if you bring them tribute. He also thinks they know what happened to his mama and how he can take care of what he refers to as his "other problem," aka his crush on an older boy. But he's having difficulty convincing anyone else that the Whispers are real.

This is a whimsical story of a boy who still believes in miracles and fairy creatures, but who is also struggling with a family with a missing member and who hasn't yet come out to anyone and is relentlessly teased. This mashup of contemporary fiction and fantasy makes for a few awkwardly written transitions between the two, and Riley's inner monologue doesn't always read true for a junior high student. Nonetheless, the fantasy element will draw readers in, particularly those who have enjoyed fairy tales in the past.