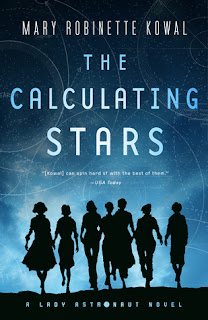 A meteorite crashes to Earth during the 1950s and obliterates Washington, D.C., killing hundreds of thousands of people and leaving many more homeless and injured. The resulting steam and ash in the air sets off several years of cold weather, which will soon be followed by accelerated global warming. Elma is concerned that this is an extinction event, and she and her husband convince the fractured U.S. government to focus on colonizing the moon and Mars while there is still a chance to get off Earth. Elma served as a WASP during the second world war and would make a fantastic astronaut, be she and the other female pilots she knows are routinely passed over because of their gender. Will she be able to convince the good old boys that women would make excellent astronauts?

I was the first one to check out this book from my local library, and I finished it in less than a day, often choosing not to eat or sleep because I wanted to find out what happened. This book is set in the same general time period as Hidden Figures, so if you liked that story where "computer" refers to a woman who does math by hand and there is rampant sexism but women are fighting back, you'll love this one. If you enjoyed any of the myriad dystopian disaster books that followed on the heels of the Hunger Games (a la Life as We Knew It), then you'll enjoy this one. If you like astronauts and space and thinking about how they train and how they build the rockets and actually get them into space, you'll like this book.

With well-rounded characters, appropriate amounts of world-building, and a compelling plot, this book is highly recommended.

Recommended for: adults and teens
Red Flags: Not many as it's set in the 1950s and the characters are adults. Rampant sexism is obvious - more than one person refers to the female astronauts as "astronettes" and asks how they'll do their hair and makeup in space.
Overall Rating: 5/5 stars

Read-Alikes: Hidden Figures, Life as We Knew It,
Posted by Jenni Frencham at 12:00 AM

Okay, that just made it into my Kindle. Awesome :)