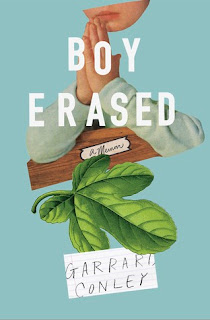 This is Garrard Conley's story of his time in an outpatient program through Love In Action (LIA), a "restorative therapy" program meant to turn gay kids into straight kids. Conley grew up in the American South, aka the Bible Belt, and as such was highly involved in Baptist-esque Christian values that pervade nearly everything in that part of the country. After he was raped in college, his rapist called his parents and outed him; the result of this is his brief visit to the LIA program before he decided it was baloney and chose to leave the program.

I was so excited to read this story because, like Conley, I too was raised in a fundamentalist Christian church. I, too, knew I was gay but kept it hidden because I knew what my church thought about that, so I had the internalized homophobia to the degree that only fundamentalists experience. Not only was my gayness wrong, but it was so wrong it could ACTUALLY CONDEMN ME TO HELL, regardless of my current relationship with Jesus or the fact that I had never acted on my feelings. I, too, came to the conclusion that I needed help with healing from my "same-sex attraction (SSA)." I, too, attempted to use a program like LIA, although mine was entirely online.

So what I can tell you is that his description of the way they treat people at these programs - from dress codes to strict rules to emphasis on finding the source of a person's gayness - rings entirely true. The idea that you just need to pray harder or try harder or want to be straight more in order to be healed by God - this is what was pounded in my head, too. Like Conley, I too decided that this was a lie fed to me by the church, although it took me a good deal longer than Conley.

I feel for Conley in his feeling that he needed to choose: abandon his sexuality and his new found ideas and things he's learned outside his church circle, or abandon his family/faith/church community, the community he grew up in.

So why only three stars? The book itself jumps around from Conley's time in LIA to the time beforehand, including a large portion of time he spent with his father. It's too long to tell his story, and the middle of the book focuses almost exclusively on the past, when I was reading to understand how LIA would be similar to the program I went through. If Conley had followed a typical memoir timeline by starting with a brief peek at his LIA time, then reversing to his childhood and zipping through to the LIA visit again, this would have made sense. But all of that could have been maybe two chapters, not the entire center of the book.

Overall, this is a good book, but not a GREAT book.

Recommended for: adults, particularly those who were raised as Christian fundamentalists
Red Flags: lots of homophobic language
Overall Rating: 3/5 stars

Read-Alikes: Does Jesus Really Love Me?, Rapture Practice, Torn: Rescuing the Gospel from the Gays vs Christians Debate
Posted by Jenni Frencham at 12:00 AM