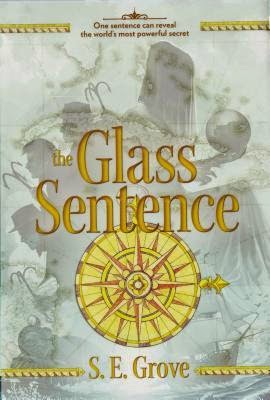 The world has been fractured into different eras. What used to be North America's eastern seaboard is now part of the 1800s, while the arctic zones have reverted to an ice age. Sophia's uncle is a cartologer, and Sophia is staying with him until her parents return from a voyage. But there are some who would use her uncle's skills at map-making for their own desires. Soon Sophia is thrust into a world of brainwashed Sandmen, pirates, street urchins, and maps as she heads to the Southwest in search of answers.

This book was amazingly imaginative and quite creative. I really appreciated that the story solidly, even though there's obviously going to be another book in the series. I enjoyed learning about this world where different eras sit right next to each other, and I was genuinely surprised at the ending. This is a thicker book a la J.K. Rowling, but strong middle grade readers will be rewarded when they tackle it.

Red Flags: "fantasy violence," including a couple of torture scenes. If the child/reader in question would not be scared by the fighting in the later Harry Potter books or the torture scenes in The Princess Bride, then s/he can handle this book.

Read-Alikes: The Eighth Day, The Mark of the Dragonfly,Ophelia and the Marvelous Boy
Posted by Jenni Frencham at 12:00 AM