The 14 Fibs of Gregory K 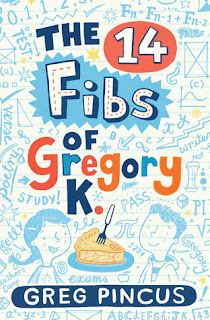 Greg is surrounded by math-aholics.  His father and his brother both have won the annual City Math competition, and his mother and his younger sister also enjoy math.  Greg has feigned enthusiasm for math his entire life when really he would rather be a writer.  He has hidden notebooks filled with stories and poems.  But when Greg chooses to enter the City Math competition in order to save his math grade and possibly convince his parents to let him go to Author Camp, he soon finds that he'll have to learn to combine his greatest talent with his secret weakness.

This book was just adorable.  The family was very believable (if weird), Greg sounded exactly like a middle school student, and the trauma of math class plus his friend moving made for a great plot. Also, I love the title of the book; it's clever enough to hook readers in, but also becomes a major part of the story's resolution. This would be a fun book for math whizzes and mathophobes alike, and it has definitely earned its place on the shelves of my middle school library.