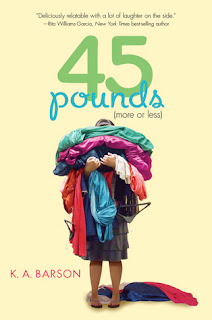 Ann lives with her perfect, skinny mother, her stepfather, and her twin siblings Justice and Liberty. Ann's mother is obsessed with her own weight, and Ann has been on every diet imaginable and has failed every one of them. But when Ann's aunt decides to marry her girlfriend and asks Ann to be a bridesmaid, Ann decides she needs to lose 45 pounds before the wedding. Thus begins Ann's journey on yet another diet, which leads her to see what has happened to Liberty, her four-year old sister, after living in a house with two weight-obsessed people.

I enjoyed this book. The characters were both believable and likable - except the ones I loved to hate, of course - and the drama in Ann's life was appropriate without being over-the-top. Ann does a lot of growing and changing in this book, and I appreciated the ending as well. Unlike some other books I have reviewed, Ann's life seemed very realistic: she lost weight by eating better and exercising, instead of attempting expensive and dangerous surgery; she reinvented herself at home, rather than insisting on being sent to a boarding school halfway across the country. I also appreciated that Ann's aunt is a lesbian, but that her orientation isn't the focus of the book, but rather simply a fact. I would definitely add this book to my library's collection.

Red Flags: Ann's grandmother is a bigot, but she's a ridiculous bigot, similar to the grandmother on the failed TV series The New Normal.